In another world, in another dimension — perhaps even one where we were attacked by the less effective Coorsvirus — we’d be watching Opening Day today.

In this world, in this dimension — where we’re all being killed by a virus that shares a name with a shitty, mass produced, low-quality lager — we can actually get a view into what might have happened.

The guys at Out of the Park Baseball were nice enough to set us up with a copy of OOTP21. This will give us the capability to have some sort of daily content on the site, even if there is no baseball this year.

So how will we do it?

I am going to run an OOTP21 simulation each day, posting the results here when the normal game time would have been. I’m just an observer in this simulation, so I’ll only be following along and relaying to you what happened.

Each day you’ll get a summary of what happened, some comments, and of course, a chance to add your own. I’ll be focusing on the Pirates, but also sharing what the prospects are doing each day when their season begins.

This is all meant to be a fun project, aimed at giving us something to follow daily, and something to discuss when there is no baseball.

We’ve also got two other similar, season-long projects that will be announced soon.

For now, it’s Opening Day. The OOTP21 Pittsburgh Pirates broke camp in Bradenton and head up to the Trop in St. Pete this afternoon for the first game of the season.

Before we preview that game, let’s look at the Opening Day roster that OOTP21 Derek Shelton and Ben Cherington came up with. 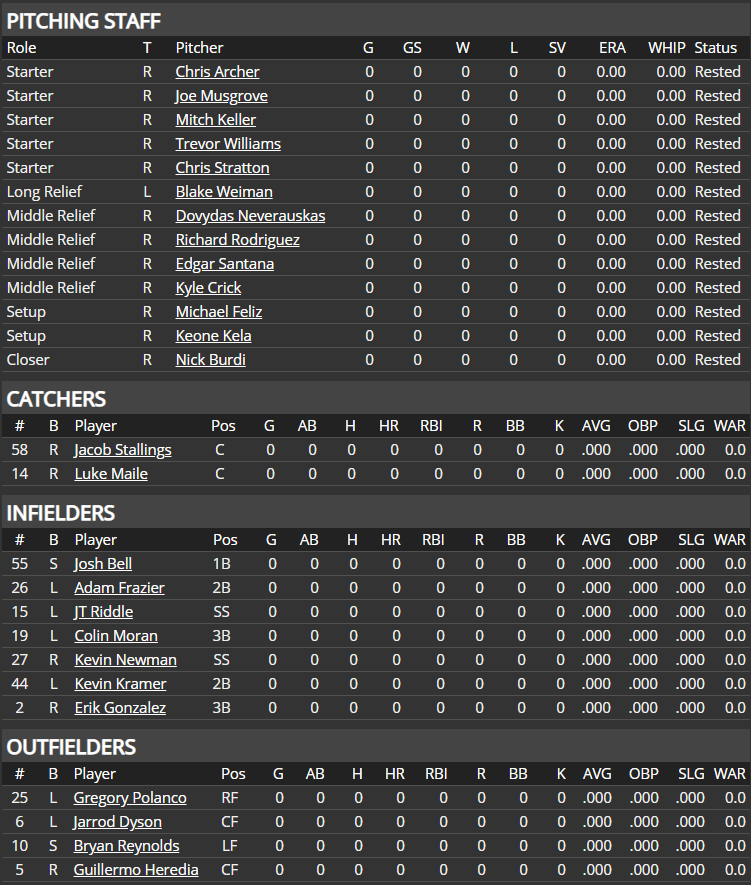 This looks very similar to what the roster might have been in real life. The biggest surprises were that Chris Stratton got the fifth starter spot (Steven Brault started on the IL), and Nick Burdi stole the closer position from Keone Kela.

That highlights an interesting battle that would have played out this year. Kela is the better option now for closer, but Burdi might be the better long-term choice. It will be fun watching Burdi all year in that role, with the thought that his success could provide a big impact for the future of the OOTP21 Pirates. I need a better name for them.

The lineups are about normal, except for a few surprises. Here is what Derek Shelton plans to use on most days.

Everything looks normal, until you get to Erik Gonzalez playing third base over Colin Moran. OOTP rates Gonzalez a 55 defensively, versus a 45 for Moran. The only advantage Moran has on offense is a slightly better contact skill, at 50 versus 45.

I’ll be waiting for Ke’Bryan Hayes, but watching what Gonzalez can do in his limited time.

As I mentioned earlier, there were some injuries coming out of camp. Here’s the Injury Update:

We knew that Taillon was rehabbing from Tommy John, while Felipe Vazquez is rightfully in jail for a long time.

Clay Holmes and Steven Brault start the year on the disabled list, and neither will be back until around early-May. I’m guessing they’ll both have a good shot at the Major League roster when they return.

Finally, let’s get a look at the upcoming opponents heading into the season.

The Pirates take on Charlie Morton this afternoon at 4:05 PM EST. They’ve got Tyler Glasnow on Saturday, after a day off tomorrow.

Check back at 4:05 PM for the results of the opener!

It’s Opening Day! No matter if there’s actual baseball to be played.